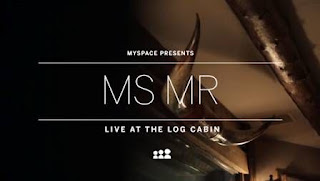 I was intrigued when an email regarding Myspace landed in my inbox earlier this week with a live performance by MS MR. I had long thought of Myspace as dead and firmly in the past but it looks like they are trying to make a go of it again. Their newest endeavor is a series of exclusive studio performances shot at The Log Cabin in New York City. MS MR laid claim to the inaugural performance which can be viewed here. Unfortunately Myspace doesn't seem to want to let us directly embed the video. While the video does a good job of capturing dialogue and giving the performance quite a bit of personality, I don't think it does MS MR justice. Although, this might just be me being Jaded after catching them in Leeds two weeks back. Still worth checking out though!